So today I’ve decided to do a post on a new pair of running shoes I bought as the Nike Frees I liked to wear had been worn down after over a year of use. You may have heard of the Nike Vaporfly 4% – a running shoe claimed to make you use 4% less energy, allowing you to run faster. When these were released in 2017 shortly after Eluid Kipchoge’s Breaking 2 Marathon attempt I was excited but slightly sceptical about how a shoe could claim to make you 4% faster. That would mean a 2:05:00 marathoner would be able to run a 2 hour marathon in theory.

Needless to say, a year and a bit later my dad came across the shoe and suggested trying it out to see what benefits I could reap from it and I was open to that suggestion. Unsurprisingly though, the shoe was out of stock despite its expensive £200+ price tag, so I went for the next nearest shoe to the Nike Vaporfly 4% – the Nike Zoom Fly, considered to be the next best shoe for marathon running in particular priced at around £130. I managed to grab mine on sale in store and bought them for a neat £78!

The shoe has a 33m height and a 10mm offset from heel to toe. Nike uses Lunarlon foam to keep the sole light, allowing a men’s size 9 to weigh approximately 248g. The upper mesh on the shoe is very lightweight and thin, with lots of breathable holes which helps to keep your feet cooler on longer runs, coupled together at the top are the Flywire cables (the little loops holding the lace in place) and the lace itself, both of which are very thin to reduce weight and tie together nicely. At the back, you can see the shoe has a streamlined edge. Whilst I have no idea if this is purely for aesthetics, I think it may be to minimise shoe drag whilst running. Everything about this shoe screams fast!

The Feel of the Nike Zoom Fly

Before buying the shoe, I tried it on and started jogging on the spot I felt almost as if the shoe was pushing up at me – I imagine this is the responsive feeling of the carbon-infused nylon plate, inspired by the Vaporfly 4%. It made me feel excited about the prospect of wearing the shoe and I wondered whether I would actually feel the push the shoe gave me when running fast. Supposedly, this the propulsive feeling of the carbon-infused nylon plate trying to bend back into place when you are running in them. This feeling, however, was slightly diminished at higher speeds up to 16kmph but I am sure it still had some effect.

The upper mesh was very thin, but fitted rather snug around my foot; in general the tighter the lace was around the upper mesh, the more secure and comfortable the shoe felt to run in, providing the lace wasn’t too tightly knotted. When standing still I could feel quite a bit of foam on the inside of my foot at the arch, I assume to provide heel cushioning there, but this was a minor niggle which I ignored. I imagine that runners with a low arch may find this type of shoe annoying to wear if the feel of the arch cushioning is too prominent and disturbing while running. Whilst I was inactive I did find the shoe a bit uncomfortable to wear for periods of time where I was inactive, so I personally wouldn’t wear them for casual use, but certainly for running in! 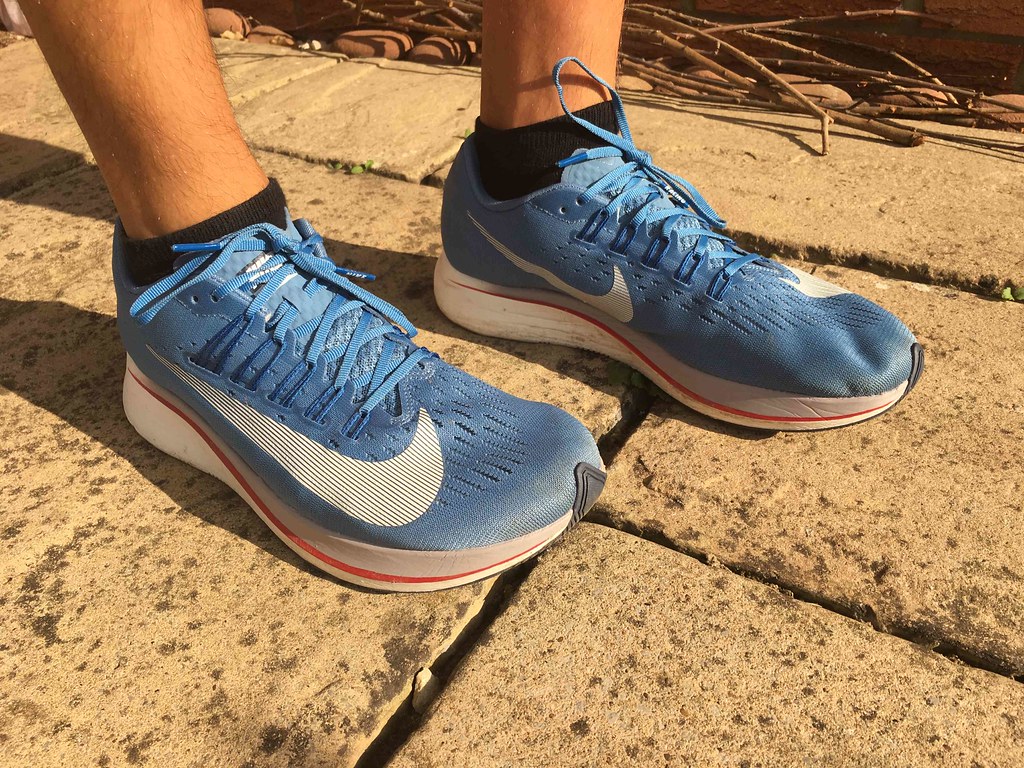 The Nike Zoom Fly’s are very comfortable to run in and have a lightweight upper mesh.

Running a Half Marathon in the Nike Zoom Fly’s

I guess the best place to test a marathon shoe is a marathon, but I haven’t trained to run a marathon nor a half marathon although running those sort of distances is my end goal as a senior athlete, so I decided to put them to a test during the Holstebro half marathon in Denmark whilst I was on holiday.

The shoe did the job alright, I could run in them comfortably and quickly and achieved a 78:55 half marathon time there. I could feel that the shoe almost encouraged landing on the forefoot because of the way it is designed which is a good thing, the only downside I could find was that due to my socks slipping down my heel as I was running, at the end I had blisters on the back of each heel, but this issue can easily be resolved by using thicker socks, a bit further above the ankle.

I would definitely recommend Nike Zoom Fly’s to any serious runner or any long distance runner. They are a bit more expensive, but if you go into a Nike store which sells the shoes, you may be able to bag them for less. For some people, they may take a while to get used to, but I am certain if they are a match, they will become your best friend on long runs to keep propelling and urging you forwards and faster. I do not know how much of a difference these shoes will make in your running performance compared to the Vaporfly 4%, but as the next nearest thing to them, if you need an edge I would say go and get it.

Do you own a pair of Nike Zoom Fly’s? How do you feel running in them?

The Difference Between Carbohydrates And Sugars

Why Runners Should Do Resistance Training